Better Route
I have decided to follow the Google (Bike) Map instead of the Adventure Cycle route.  This seems to put me on a more direct (and less hilly) SE route.  At the intersection of the Mississippi and Ohio Rivers, I crossed into the corner of Illinois near a town called Cairo.

Near Cairo IL, I was stopped (AGAIN) by a policeman.  Officer Damon Ray was amazing!  We discussed my “mission” and he proceeded to set up a photo with his squard car (lights on) and my bike.  He also took a selfie of us and posted it to Facebook as we talked.  He posted some nice things as he shared the photo with our daughter Melissa.  I was deeply touched by Officer Ray’s post, but particularly by Melissa’s response.

Goodbye Illinois, Hello Kentucky!
I crossed over the Ohio River on a very long bridge into Kentucky.  And the hills began to roll once again! 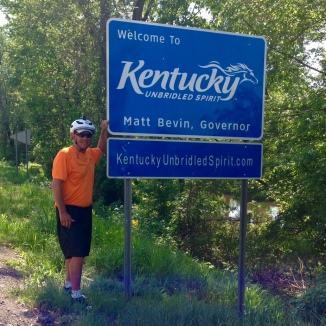 Mayfield, KY
I made it to Mayfield KY where a policeman informed me that there was no camping there, as everyone goes to “the lake.”  (He was referring to Kentucky Lake, which is quite a bit east of here.)  I wound up at the Super 8.